David Letterman took an extra 17 minutes to say goodbye. His final show ran over its one-hour time slot, but rather than editing it down, CBS decided to let it run in its entirety.  It means if you set your PVR to start and end on time, you missed the last party of Dave’s last show. 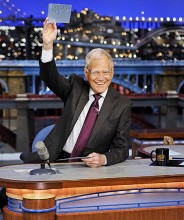 Several audience members left the Ed Sullivan Theater in New York with tears in their eyes after the show’s taping.  One audience member said Letterman “was guarded” in his emotions but it was clear that “it was really hard for him” to end his 33 years as a network late night host. The audience member said while you could see the emotion on his face but he was feeling more than he was letting on.  Here are some of Dave’s best lines from the night:

“It’s beginning to look like I’m not going to get The Tonight Show.”

“(In retirement) I hope to become the new face of Scientology.”

“My son keeps saying to me, ‘Why does daddy have to go to prison?'”

“When I screw up now, I’ll have to go on someone else’s show to apologize.”