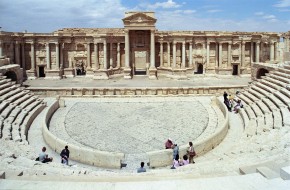 The arts and antiquity world is on edge now that Islamic State terrorists in Syria have entered the Unesco World Heritage site of Palmyra after seizing the town next to the ancient ruins.  Unesco says the destruction of Palmyra would be an enormous loss to humanity. The ancient ruins date to the 1st and 2nd Century, when the region was under Roman rule. They’re situated on the road between the capital, Damascus, and the contested eastern city of Deir al-Zour and close to oil and gas fields which the Syrian government uses to generate electricity.  The site contains the monumental ruins of a great city, which Unesco and others consider one of the most important cultural centres of the ancient world.  The terrorists have previously demolished ancient sites in Iraq that pre-date Islam