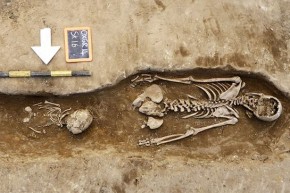 The skeleton of a what is believed to be a “sex crazed” nun has been unearthed at an excavation site near Oxford, England.  Archeologists believe it was a fallen nun because the remains of the woman were found face-down – a common punishment for nuns thought to have engaged in immoral behaviour.  They also believe it was a nun because the site sits next to the a pub, which is built on the remains of the Littlemore Priory nunnery which was founded in 1110.  In all they’ve found about 100 skeletons and figure they’re 600 and 900 years old.  Being buried face down – a so-called ‘prone burial’ – was reserved for sinners and witches.