Saying he wants to ensure those whose job is to keep us safe have the necessary tools, Prime Minister Harper unveiled more anti-terror measures in Toronto Thursday. 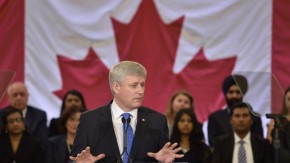 Our spy agency, the Canadian Security and Intelligence Service (CSIS) will get $137-million over five years then $41-million each year after that.=

The prime minister says, ”CSIS will expand its ability to intercept terrorists planning acts of murder and terror on Canadian soil and to stop would-be jihadists attempting to travel abroad.”

The Canada Revenue Agency will receive another $10-million over five years to tackle terror financing.

Harper says the government will not stand by while the money of ”honest, hard-working” Canadians is used to pay for terrorist activities.

”Therefore, the Revenue Agency will also increase resources … the resources used to identify and to shut down charities that finance terrorist activities.”

Thirdly, all travellers who need a visa to get into Canada will now be required to go through biometric screening.