SENATE EXPENSE SCANDAL TO HEAT UP 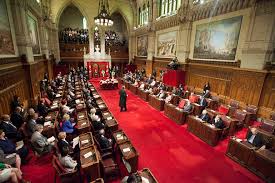 New information gleaned from the completed audit of Canadian senators and their expenses, shows some 30 senators apparently owing anywhere from thousands to tens of thousands of dollars each, in alleged inappropriate expenses.  Sources indicate the total is almost 1 million dollars and involves both Conservative and Liberal senators, more than half of whom still sit in the red chamber.  The former House of Commons Law Clerk Rob Walsh told CTV’s Question Period on the weekend that the scandal has left the Upper Chamber in a legal mess.  It has also renewed calls for Senate reform  – and in the case of the NDP, for it to be abolished.  Opposition Leader Leader Tom Mulcair has labeled the Senate undemocratic and responsible to no one.  Mulcair wants to know how can we continue, in a free and democratic society like Canada , to tolerate an institution that he says is such a relic from the past.

The report was made available to the senate last week and will be formally released to the public tomorrow.  Reports suggest that five senators account for the bulk of the amount alleged to be owing at more than half a million dollars.