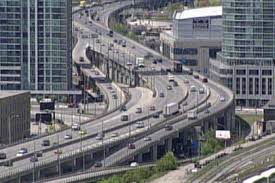 A decision on the fate of the eastern portion of the Gardner Expressway is expected later today or tomorrow.  It is still too close to call whether city Councillors will opt to either tear the highway down between Jarvis and the Don Valley Parkway, or leave a link, the so-called “hybrid” option.  Mayor John Tory has come down on the side of the hybrid option. It’s more expensive but would cause less traffic disruption. Others favour the teardown option which would lead to the creation of a boulevard and be more favourable to waterfront development. A third option, tunnelling the Gardner, is expected to be raised during today’s debate.  Mayor Tory was asked about that this morning and says he’s been told by officials that it’s too late to consider that as an option.  Tory says safety considerations demand action right now.  An informal poll of Councillors shows 16 support the Hybrid option, 16 favour the boulevard option, the remaining Councillors are said to be undecided.