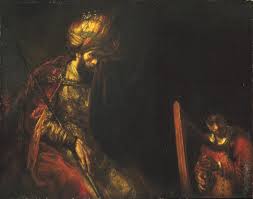 It has taken more than eight years of painstaking restoration as well as a “CSI-like” investigation, but now a museum in The Hague, has finally declared that one of its most prized paintings is by Dutch master Rembrandt. The painting, titled “Saul and David,” and attributed to Rembrandt, was purchased by the Hague museum’s director and put on display 1898.  It hung there until 1969, when a German-Dutch art historian, and Rembrandt expert, cast doubt on its origins.  The painting was created in two stages starting around 1645.  It depicts the young hero David, playing a harp for the elderly King Saul.  Moved by the music, we see the king using a curtain to wipe the tears from his eye.  Experts used real-life crime scene investigative techniques during the painting’s restoration and announced this week it is a Rembrandt.   The announcement came just in time for the exhibition, called “Rembrandt? The Case of Saul and David”, which opened Thursday in the Hague.