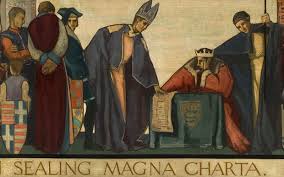 One of the world’s best known historic documents, the Magna Carta, will be exhibited for the first time in Canada this fall.  The document will be on diplay at Toronto’s historic Fort York from October 4th to November 7th.  This year marks the 800th anniversary of the first sealing of the Magna Carta – which in Latin means the Great Charter.  Yesterday Queen Elizabeth led commemorations at Runnymede, Surrey, where the document was signed by King John on June 15, 1215.

The Magna Carta and its companion document, the Charter of the Forest, set the groundwork for many concepts defining democratic life today.  As symbols of justice, they act as reminders that those who govern, do so only by the consent of the people.  The Magna Carta is considered the founding document of English law and civil liberties.  It established the principle that the king was subject to the law, rather than above it and also stopped unlawful arrest or imprisonment