He threw 7 1/3 innings of one-run ball in Toronto’s 7-1 victory over his former team the New York Mets. 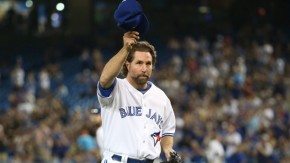 Manager John Gibbons says, ”I really don’t know how he did it.”

The Jays have placed Dickey on the bereavement list so he can attend the funeral of his 63-year old father.

Under MLB rules, players can be on the list for a minimum of three days and as many as seven.

His next scheduled start is Tuesday at Tampa Bay, but the Jays have told him to take as long as he needs.