Three decades have past but the RCMP says the investigation into the worst terrorist act in Canadian history remains ”active and ongoing.”

On June 23, 1985, an explosion downed Air India Flight 182 en route to New Delhi, killing all 329 aboard, most of them Canadians of Indian descent.

Authorities think Sikh extremists, fights for independence, sabotaged the plane that crashed into the Atlantic Ocean off the Irish coast.

Memorials were held in Toronto, Montreal and Vancouver. 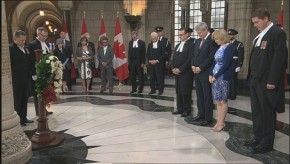 He told family members he did so in honour of the victims but also to demonstrate the government’s doing all it can to ensure other families won’t endure the kind of pain and loss they have.

Meanwhile, Federal Justice Minister Peter MacKay joined community members and families of the victims at a ceremony in Ahakista on Ireland’s southwest coast.