BOUCHARD OUT WITH INJURY 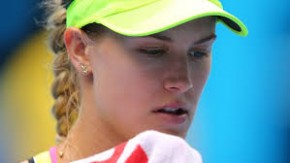 The miserable year for Canada’s tennis darling Eugenie Bouchard has gone from bad to worse.  Bouchard was forced to withdraw with an abdominal injury during the second set of her third round match at the Eastbourne International in England this morning.   Bouchard had lost the opening set to Switzerland’s Belinda Bencic and was being thoroughly outplayed when she called for a trainer and then withdrew.   Bouchard, who is ranked eleventh in the world, has now lost 10 of her past 12 matches.  The injury has developed just five days before the start of Wimbledon where she is seeded 12th.