Andy Pringle has been endorsed by members of the civic appointments committee to continue serving on the Toronto Police Services Board, a recommendation that still needs to be approved by full city council. 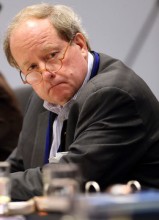 The close friend of Mayor John Tory says he’s prepared to step into the chair’s position if needed, but only on an interim basis.

A published report last week said that Pringle would take over the chair’s role when Alok Mukherjee steps down August 1st.

But Pringle said yesterday he’s not seeking to take on the position full time because he simply doesn’t have the time.  He says he is already on about a dozen different boards, plus he’s the chair of an investment company.  He says he also uses his time to raise funds for several charities.