If you can’t make it to the Vatican, you may find the next best thing in Montreal. The beauty and grandeur of Michelangelo’s Sistine Chapel ceiling are about to go on display without the long lines or hordes of gawking tourists. 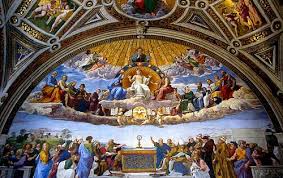 Beginning this Friday, visitors to a gallery at the Montreal Convention Centre will be able to attend the world premiere of an exhibit that recreates the Renaissance-era masterpiece. Thirty-three life-size photographs of the chapel ceiling’s frescoes are hung along the gallery’s walls as well as suspended overhead, recreating the feel of the rectangular-domed building in the Pope’s official residence in Vatican City.  The exhibit will be in Montreal for three months and is tentatively scheduled to visit Toronto and Vancouver, before heading to the United States.  Dates have yet to be confirmed for the Toronto visit.