The Ontario Science Centre celebrated a milestone yesterday when it welcomed its its 50-millionth visitor. 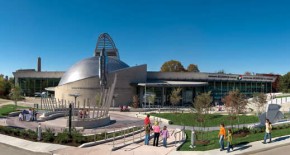 An unsuspecting American family of four, the Roys, from Middletown, Connecticut, walked up to the counter and purchased their tickets, like everyone else, before being pulled aside and congratulated on the significance of their visit.  After their tour they said they could see why the facility has been such a popular attraction throughout its 46-year history.  When it was built in 1969, the provincially-funded facility was aimed at giving people a hands-on experience with science.