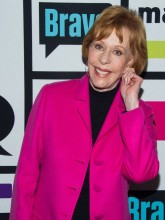 The president of the Screen Actors Guild said in a statement that “Carol Burnett is a creative dynamo and a comedic genius.”  Ken Howard also referred to The Carol Burnett Show on CBS from 1967 to 1978 as “a masterpiece of variety programming.”

“She embodies the generosity and courage that the greatest actors use in creating enduring and memorable characters…Carol has delighted and inspired millions of viewers and thousands of comedic actors,” Howard went on to say.

The SAG honour is given annually to an actor who fosters the “finest ideals of the acting profession.”

The SAG honour will join Carrol Burnett’s massive lifetime award haul which includes multiple Emmys, a special Tony, the Presidential Medal of Freedom and the Mark Twain Prize for Humour. The Screen Actors Guild Awards will be broadcast on January 30th of next year.

Carol Burnett turned 82 this past April.