If you want to live to be 110, you might consider following the example of Englewood, New Jersey, zoomer Agnes Fenton. 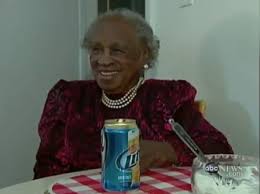 Agnew turned 110 earlier this week and says her secret is beer and whiskey.  She says a doctor who treated her for a benign tumor decades ago gave her some parting words of advice.  He told her you must drink three beers and a shot, preferably Johnnie Walker Blue Label, every day.  She’s been doing that for roughly seven decades.  In a mince-no-words interview, Fenton dismissed her 110th birthday as “just another day”, but a good reason for three beers and a shot.