The British government is trying to stop a watercolour of Niagara Falls, which was painted in 1762, from leaving the UK. 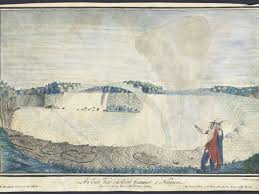 The painting, “An East View of the Great Cataract of Niagara”, is understood to be the first eyewitness painting of the landmark.

It was sold to a foreign buyer in April, but has now been placed under a temporary export ban, in hopes a British buyer will match the $240,000 asking price.

The work was was painted by British military artist Captain Thomas Davies, during one of several tours of duty in North America. England’s Culture Minister says the artwork helped demonstrate Britain’s global role in the 18th century. Captain Davies’ painting is believed to be the first accurate, on site painting of the landmark. It is also thought to be the earliest depiction of Niagara’s ever-present rainbow.