Helen Mirren, Maggie Smith, and Benedict Cumberbatch and are just some of the British acting elite scheduled to attend this year’s London Film Festival. 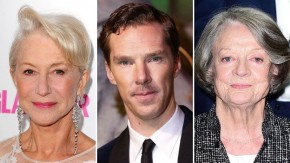 Among the highlights to be screened during the festival are “Trumbo,” starring Bryan Cranston as Dalton Trumbo, the Hollywood screenwriter who was blacklisted for being an alleged Communist sympathizer.

Other headlining films include “The Lady in the Van,” with Maggie Smith starring as an elderly woman who lived in a battered car for over a decade.
The London Film Festival, which runs October 7-18, opens with the European premiere of the historical drama “Suffragette,” starring Meryl Streep and Carey Mulligan.