BILLY THE KID PHOTO WORTH $5 MILLION

What is believed to be just the second actual picture of one of the most famous outlaws of the old American west, has been valued at $5,000,000. 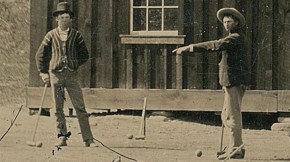 Billy the Kid (shown on the left). also known as William Bonney, was born in 1859 as Henry McCarty. He was just 21 when when he was killed by New Mexico sheriff Pat Garrett.  The kid was a jack of all trades when it came to crime and he became something of a folk hero despite killing 21 men.

The new photo is a 4×5 tintype photograph that shows the Kid playing croquet in 1878.

The photo has been authenticated by a San Francisco-based company that deals in old west Americana and has been contacted by potential buyers.  A real photo of Billy the Kid is considered one of the most sought after antiques from that era hence the $5,000,000 price tag.  That is an excellent return on investment since the person who owns it bought it in a junk shop for $2.00.