Oprah says she believes in the Weight Watchers program so much, she “decided to invest in the company and partner in its evolution.” 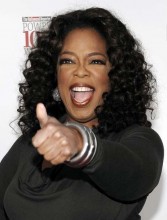 A statement from Weight Watchers also quotes Oprah as saying “Weight Watchers has given me the tools to begin to make the lasting shift that I and so many of us who are struggling with weight have longed for.”

Weight Watchers shares surged by as much as 75 percent in early trading after jumping about 90 percent in pre-market trading.