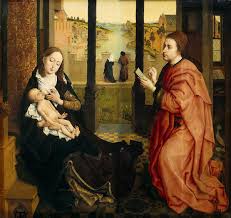 The British government has placed an export ban on  the 15th century oil which is valued at more than $5 million.

Britain’s Culture Minister says the painting is the only example of St. Luke drawing the Virgin Mary and Christ by a Northern European artist on display in England.

Bouts was one of the leading and most influential painters of the period and is considered a pioneer of the oil painting technique.

The export ban could be extended through June of next year which a serious buyer is sought in the United Kingdom.