An Ontario teen has undergone a triple organ transplant. The surgery, the first of its kind at Toronto General Hospital has bought Reid Wylie a great deal more comfort.

Now he is no longer dependent on an oxygen tank, he is spared from taking handfuls 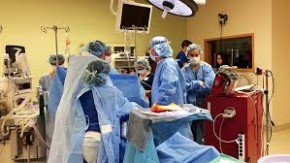 of pills each day and he can turn his back on insulin shots for diabetes. The best part is he’s breathing much more easily.

The Hospital admits that while there have been triple transplants involving various organs, replacing lungs, liver and pancreas in a single operation is a world first.