A Mexican environmentalist says illegal loggers have clear-cut at least 10 hectares in the monarch butterflies’ wintering grounds – in central Mexico. 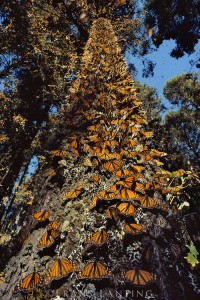 And writer and activist Homero Aridjis says the illegal logging continued unchecked between April and August – in one of the most important areas of the monarch reserve.

Officials had said earlier that the reserve lost about 9 hectares – due to illegal logging this year, and said a number of arrests were made.

Illegal logging in Mexico had decreased to almost zero in 2012.

The butterflies depend on the pine and fir forests west of Mexico City –  to shelter them against cold and rain.