2016 will mark the last full year that TTC Metropasses will be sold in their current form as the transit authority begins its transition to the PRESTO fare card. To mark the occasion, each monthly metropass issued next year will bear an iconic image of the city. At the end of the year, customers who piece all 12 passes together will have a one of a kind TTC collectible that celebrates Toronto. The January pass features an image of the Nathan Phillips Square skating rink and is now on sale. 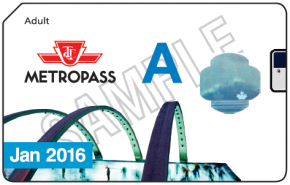 Metropasses were first introduced on the TTC in May of 1980 at a cost of $26. An adult metropass is now $141.50 a month. The TTC says more than 321,000 customers purchase a metropass each month. Transit commissioners are looking at raising fares in 2016 to help cope with a projected $53 million shortfall, but Metropass users could get a break from rising costs.