SMARTTRACK RIDERSHIP TO SOAR WITH FREQUENT SERVICE AND SAME FARE AS TTC: U OF T STUDY

It would also reduce crowding on the Yonge-University subway line south of Bloor by as much as 17 percent. 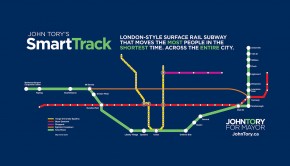 These are just two of the findings of a report prepared by the University of Toronto Transportation Research Institute and Toronto’s planning department to be released today at Toronto City Hall.

The numbers also show that frequency of service and fare prices would play a key role in boosting ridership on the tracks that would connect three critical employment hubs;  downtown Toronto, in Mississauga and Markham.

As for timing and fares on SmartTrack, the report’s authors find the best scenario is to have trains five minutes apart priced at the cost of a TTC token, which would attract 315,000 riders by 2031.

Also to be released today, is the Western Corridor Feasibility Review. It looks at the various scenarios for taking SmartTrack to the airport employment lands, the second largest employment node in the Toronto region.