ROWLING'S MAGIC CHAIR UP FOR AUCTION

It’s where the magic and the witchcraft began. 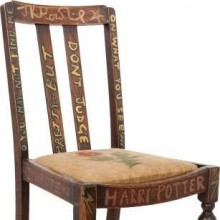 The humble chair that J.K. Rowling sat on while writing the first two books of the Harry Potter series is going on the auction block in New York April 6th with an opening bid of $45,000.

The chair will be on display at Heritage Auction’s Park Avenue gallery beginning Friday.