Canada’s average traffic congestion rate has dropped by nearly 2 % and Toronto’s congestion is down by 3%. 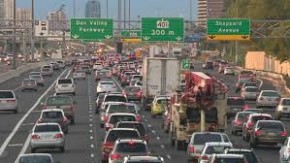 That was the positive news in the 2016 TomTom Traffic Index which was released this morning.

For Toronto specifically – traffic congestion is still the second-highest in the country at 28% – but the city seems to be better managing the problem with a 3% congestion reduction over the previous index.

This 3% congestion reduction means that Torontonians on average will spend 11 hours less sitting in traffic jams per year.