DEBRIS FROM EGYPTAIR 804 FOUND IN THE SEA

Egypt’s army says it’s found the wreckage of EgyptAir Flight 804, which disappeared yesterday morning on a flight from from Paris to Cairo with 66 people, including two Canadians, aboard. 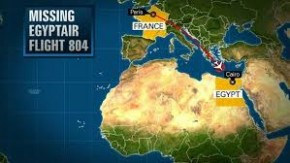 A spokesman says wreckage and personal belongings were located in the Mediterranean Sea about 300 kilometres north of Alexandria.

As yet authorities say there is no indication of what caused the plane to crash…but at a campaign event in New Jersey last night, presumptive GOP candidate and instant aviation expert Donald Trump said it was the work of terrorism.  Trump was taking a shot at his Democratic rival Hillary Clinton for refusing to use the term “radical Islamic terrorism,” when he brought up the EgyptAir situation.

French officials say there’s still no concrete indication of what brought down the aircraft down.