Two portraits, done in Albany, New York during the Revolutionary War by a British spy operating out of Canada, are on auction in New York City today. 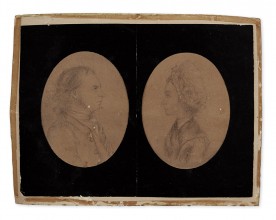 Swann Auction Galleries is putting John Andre’s circa-1776 portraits of Albany’s Mayor and his wife on the block.  The pencil-on-paper sketches are expected to fetch upwards of $75,000 dollars.

The portraits were done after Andre was captured by the Americans in Canada in 1775.  He spent several weeks with the Mayor and his wife while en-route to captivity in Pennsylvania.  Andre was released and took over the British spy network in the states.  He was eventually captured again and sent to the gallows