COC AND KINKY BOOTS SCORE BIG AT THE DORAS 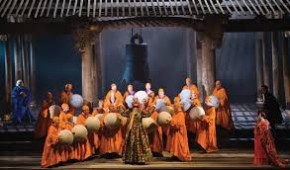 The COC was the frontrunner in the opera division heading into the ceremony, and emerged as the night’s biggest winner with a total of eight awards.  The COC scored five Doras for “Siegfried,” including outstanding production and directing honours for Francois Girard, and three for “La Traviata.”

The Doras have been honouring leading Toronto talent in the performing arts for the past 37 years.