The art world is facing a true international “whodunit” featuring a Scottish artist who is being sued for 5 million dollars, over a painting done in Thunder Bay, that he claims he didn’t paint. 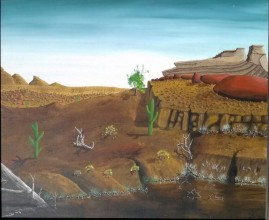 Peter Doig is a 57-year old Edinburgh native, known for creating surreal, otherworldly landscapes.  He  immediately distanced himself from a photo of a canvas that former guard Robert Fletcher claims was created at the Thunder Bay Correctional Centre.

Fletcher says he bought the painting in 1975 while he was working as Doig’s parole officer in a bid to stop Doig from going back to drug dealing.

Problem is, Doig’s never been to Thunder Bay and never did any time there.  He thinks the painting is actually the work of Edward Doige, who died in 2012 and did do time in Thunder Bay.

The suit centres on Fletcher’s contention that Doig’s denial put the kibosh on a plan to sell the work for millions of dollars.   And just to add to the international intrigue, the case is set to go before a judge in the United States next month.