Oil paintings done by Britain’s war time leader, Sir Winston Churchill are being auctioned off in London and were expected to command upwards of $1 million dollars. 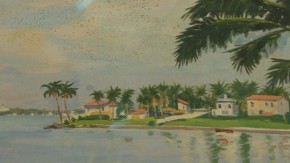 A picture painted by Sir Winston Churchill on his first holiday after World War Two sold for about $300,00.  It shows a view from Miami Beach in Florida and was painted in 1946 when Churchill was staying with Canadian industrialist Colonel Frank W. Clark.

The other painting,was held back after failing to reach is guide price of $750 thousand.

The works are among some of the 500 Churchill painted in his lifetime, most of which he gave away as gifts.