The head of the International Monetary Fund is wading into the issue of Canada’s soaring real estate prices.

Christine LaGarde says moves to tackle Canada’s over heated housing market should be targeted at specific regions such as Toronto and Vancouver, rather than imposed nationally. She’s also suggested implementing policies including new mortgage rules requiring minimum down payments. 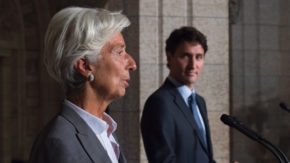 LaGarde made her comments on Parliament Hill Tuesday after a meeting with Prime Minister Justin Trudeau.

The IMF managing director was also complimentary about Canada’s approach to gender equality.

“And a little bird actually told me, that of the 24 chairs of the IMF, the Canadian chair as of the beginning of November, might be one of the very few if not the only chair occupied by a woman,” LaGarde explained.

LaGarde praised the Trudeau government’s economic policies as an example of the approach the IMF is recommending for governments globally. She also expressed hope that the “very reasonable” Comprehensive Economic and Trade Agreement between Canada and the European Union will soon be finalized.