Canada’s own Tatiana Maslany has won the Emmy Award for best lead actress in a drama for her performances in Orphan Black.

“I feel so lucky to be on a show that puts women at the centre and thank you so much to the Academy, thank you,” Maslany told the audience in L.A. last night.

30 year old Maslany is often regarded as one of the hardest-working women in television, and plays multiple clones with varying personalities and accents in the sci-fi series.

It was the Regina native’s second Emmy nomination for her work on the show, which is shot in Toronto.

Orphan Black recently aired its fourth season and the next season will be its final one.

Two Zoomer actors were honoured for their roles in TV comedies last night at the Emmys.

And while accepting, she took aim at the campaign of Republican presidential candidate Donald Trump.

“I think that Veep has torn down the wall between comedy and politics. Our show started out as a political satire but it now feels more like a sobering documentary, so I certainly do promise to rebuild that wall and make Mexico pay for,” joked Louis-Drefus referencing Trump’s notorious campaign promise. 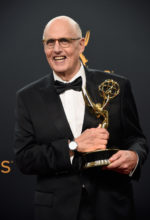 For the men, 72 year old Jeffrey Tambor won for his role as a transgender woman in Transparent.

“Please give transgender talent a chance, give them auditions, give them their stories,” Tambor said as he directed his message to show creators.