It was the first face to face confrontation of the U.S. presidential campaign. 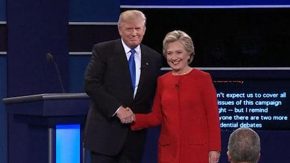 Democratic candidate Hillary Clinton and Republican contender Donald Trump clashed for more than 90 minutes in their first debate as each tried to sway a race that is now nearly tied.

Clinton and Trump sparred not only on questions of temperament and character, but tangled over differences in policy; on trade, on easing racial tensions and on foreign affairs.

“Your husband signed NAFTA, which was one of the worst things that ever happened in the manufacturing industry,” Trump said accusingly,”You go to New England, you go to Ohio, Pennsylvania, you go anywhere you want Secretary Clinton and you will see devastation where manufacturing is down 30, 40, sometimes 50 percent.”

“I think I did a great job and a great service not only for the country for even for the president in getting him to produce his birth certificate,” Trump responded.

Listen here for an 80 second synopsis of the first presidential debate:

The remaining presidential debates are October 9th and October 19th. The election is November 8th.