Actor and activist George Takei, who found fame and fortune playing Sulu on the original Star Trek series, is donating a trove of art and artifacts from his life and career to the Japanese American National Museum in Los Angeles. 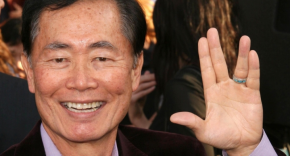 Included in the donation are to be photos, sculptures, scripts and other memorabilia from his  Star Trek days as well as items from his run for a Los Angeles City Council seat in 1973 and the Olympic torch the 79-year old carried ahead of the 1984 games in Los Angeles.

The items will form the basis of a new exhibition called  “New Frontiers: The Many Worlds of George Takei.”  It opens in March of next year.
Takei’s most recent acting credit was in the animated “Kubo and the Two Strings.”  He is an activist for gay rights and has campaigned for recognition of the Japanese-Americans, like himself and his family, who were interned during World War II.