It was the biggest home run of Edwin Encarnacion’s career. 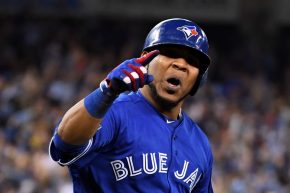 A 3-run homer in the 11th inning gave the Toronto Blue Jays a 5-2 win over the Baltimore Orioles in the sudden death AL wildcard game at Rogers Centre.

There was also a frenzy of excitement at Nathan Phillips Square, dubbed the Bird’s Nest, as hundreds of fans watched the win on the big screen.

The Jays now move on to the American League Division Series (Best of 5) which begins tomorrow afternoon at 4:30pm (Toronto time) in Arlington against the Texas Rangers.

The Jays beat Texas in last year’s ALDS, sparked by Jose Bautista’s memorable bat flip after his three-run homer in Game 5. The two teams then brawled in May after Bautista was punched in the face by Rangers infielder Rougned Odor at second base.