Award-winning stage and screen actress Janet Wright, best known for her portrayal of Eric Peterson’s long-suffering wife on “Corner Gas,” has died at the age of 71. 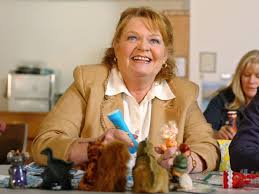 Wright was probably best know for playing Emma Leroy on the hit Canadian TV series, “Corner Gas” which ended its six-season run in 2009 and returned with a big-screen adaptation in 2014.

Wright was born in England in 1945.  Her family relocated to Canada and eventually settled in Saskatoon.  She co-founded of Saskatoon’s Persephone Theatre and performed with virtually every major theatre company in Canada.  Wright also directed for many major theatre companies including productions at the Stratford Festival.

Wright won the best actress Genie Award in 1992 for “Bordertown Cafe” and won the best supporting actress in a dramatic program or miniseries award in 2003 for “Betrayed.”

Her film credits include “The Perfect Storm,” opposite George Clooney and Mark Wahlberg and TV appearances on the TV shows “Dark Angel,” “The King of Kensington” and “The Beachcombers.”