Shinzo Abe will soon become the first leader of Japan to visit Pearl Harbor. The Japanese Prime Minister announced today he will go with U.S. President Barack Obama to the U.S. Naval Base in Hawaii that Japan attacked in 1941, propelling the United States into World War Two. 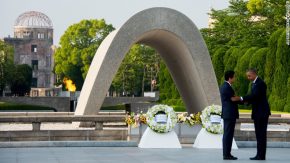 This historic visit comes after Obama became the first sitting U.S. President to visit the memorial in Hiroshima for victims of the U.S. atomic bombing of that city at the end of the war.

Abe said in a brief statement, he would visit Hawaii December 26th and 27th to pray for the war dead at Pearl Harbor and hold a final summit meeting with Obama before his presidency ends.

More than 2300 U.S. servicemen died in the aerial attack, which will be marked on the 75th anniversary on Wednesday by a remembrance ceremony on a pier overlooking the harbor.