Two valuable paintings by Dutch masters, despoiled by the Nazis in the late 1930s, are back with the family of a German Jewish art dealer exiled to Canada. 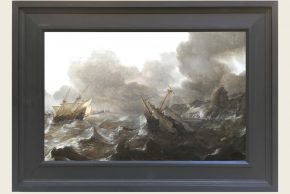 The paintings, “Ships in Distress on a Stormy Sea” (shown above) and “Landscape with Goats” were recovered from an auction in Germany and this week were presented to Max-Stern Foundation and its three beneficiary institutions, Concordia and McGill Universities in Montreal and the Hebrew University of Jerusalem.

The paintings date back to the early 16-hundreds and were among among more than 400 works of art Dusseldorf gallery owner Max Stern was forced to sell to the Nazi’s in order to be allowed to flee to England and then to Canada.

Most of his lost artwork has been found in Germany and next year, a new charity named “German Friends of the Hebrew University” will launch a program to encourage people to hand over Stern’s artwork in exchange for a tax deductible receipt.