It’s an esteemed honour for a Canadian judge. 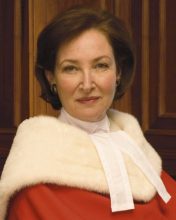 Justice Rosalie Abella has been named Global Jurist of the Year by a Chicago law school.

It’s an award given to a judge who has shown a lifetime of commitment in the face of adversity to defend human rights or principles of international criminal justice.

70 year old Abella has been a member of the Supreme Court of Canada since 2004.

She was nominated for the honour by David Jacobson, who was U.S. Ambassador to Canada from 2009 to 2013.

Northwestern Pritzker School of Law’s Center for International Human Rights calls her a pioneer, describing her as Canada’s first Jewish female judge on any court and on the Supreme court. She is cited for her work on equality in employment and extended survivor benefits to same sex partners.

Abella was born in a refugee camp in Germany in 1946 to two Holocaust survivors. Her father studied law in Poland before the Second World War, inspiring her to become a lawyer.