The Wynne Government at Queen’s Park is being lobbied by labour groups to join Alberta and raise this province’s minimum wage from $11.40 an hour to $15.00. 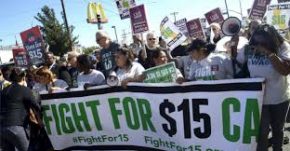 Those in favour are making the case that  a higher minimum wage will be both politically popular and make life more comfortable for people struggling to get by.

The province’s current minimum wage rose 15 cents last fall and is pegged to inflation which was a Wynne campaign promise during the last election.