Trump said yesterday he will be meeting with both leaders as he moves quickly on his campaign pledge to renegotiate the North American Free Trade Agreement. 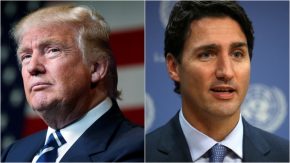 There’s been no official comment from Prime Minister Justin Trudeau’s office on a meeting with Trump, but today the Canada-U.S. relationship will figure prominently when Trudeau and his federal cabinet ministers meet today in Calgary.

Canada’s ambassador to the U.S. is at the cabinet retreat to provide an update on talks with the new administration so far.

David MacNaughton says when it comes to trade, Americans do have to pay attention to Canada.

“We are part of NAFTA and therefore there are discussions that need to be had and we’ll be having them over the next few weeks,” MacNaughton explained to reporters.

MacNaughton says the Trump Administration needs to understand how important Canada is to the American economy.

Prime Minister Trudeau and President Trump spoke on the phone Saturday when the two leaders are said to have told each other they look forward to meeting soon.