After Sunday night’s colossal mistake at the Oscars, consulting firm PricewaterhouseCoopers is the target of jokes and snickers around the world on social media.  But brand experts say it’s no laughing matter.

It’s now come to light in a Wall Street Journal report that PwC accountant Brian Cullinan had tweeted a picture of best actress winner Emma Stone before handing over the wrong envelope to Warren Beatty and Faye Dunaway. That tweet has since been deleted.

Zoomer Magazine Arts editor Mike Crisolago told Zoomer Radio’s Fight back with Libby Znaimer, the criticism is a bit harsh but someone has to take the blame.

“I was watching it with some friends, and the first thing everyone was saying was man, there’s somebody who’s going to be looking for a job tomorrow, somebody backstage from the accounting firm, so ultimately it comes down to them and the person who handed the wrong envelope,” Crisolago said. 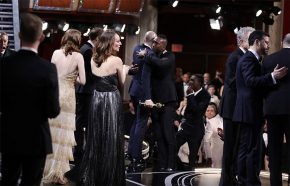 PwC issued an apology within hours of the gaffe that had La La Land mistakenly announced as best picture, before it was corrected a few minutes later live on stage, that Moonlight in fact had won.