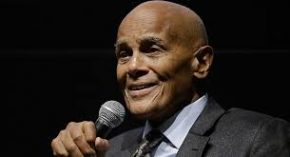 The American singer, songwriter, actor and social activist, is one of most successful African-American pop stars in history.  He was dubbed the “King of Calypso” for popularizing the Caribbean musical style in the 1950s.  He is probably best known for singing “The Banana Boat Song'”, with is signature lyric “Day-O.”  He also starred in several films, most notably the hit musical “Carmen Jones” and “Island in the Sun.”

Over the course of this career, Belafonte won three Grammy Awards, an Emmy Award and a Tony Award.