NEXT U.S. AMBASSADOR TO CANADA COULD BE POLITICAL DONOR AND PHILANTHROPIST KELLY KNIGHT CRAFT

The next U.S. Ambassador to Canada could be a big-money political donor and philanthropist with personal ties to the coal industry.

It is widely reported that the Trump administration has submitted Kelly Knight Craft’s name for the approval of the Senate. 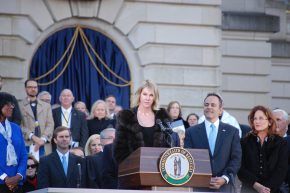 Mac Brown, chairman of the Republican party of Kentucky, calls her an “unbelievable, very nice woman who is extraordinarily hard-working… gracious, and kind.”

Knight Craft addressed the United Nations General Assembly in 2007 after President George W. Bush appointed her as an alternate delegate to the U.N. where she spoke about Bush’s pledge to fight malaria and AIDS in Africa.

She also co-founded a charity to provide food, shelter, and clothing to Sri Lankan children left homeless or orphaned following the devastating Asian tsunami of 2004.

But Knight Craft has also been investigated for a spending history that went more to overhead expenses than charity.

She was already involved in politics before her marriage a few years ago to coal billionaire Joe Craft.

A profile by McClatchy newspapers in 2012 called him possibly Kentucky’s most powerful non-elected individual. He was a critic of the Obama administration’s climate policies and drove an SUV with a licence plate stamped with the slogan, “Friends of Coal.”