Ontario’s Health Minister is offering reassurance following disturbing news that came out on Saturday suggesting the governing Liberals spend just $8.33 a day on each resident of the province’s nursing homes. That amount is less that what the government spends on prisoners in this province, at $9.73 a day.

In a statement emailed to Zoomer Radio News this morning, Doctor Eric Hoskins says the government is committed to making sure long-term care home residents receive high quality care where all of their needs are met.

It says the Long-Term Care home raw food allowance amount is just one of the dietary standards the ministry sets for long term care homes. He says regulations also require homes to have a nutrition and hydration program, which includes requirements relating to menu planning. 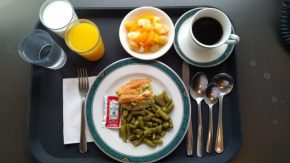 (This meal of beans, spinach souffl� and canned fruit was served in a Toronto not-for-profit home that spends extra money on resident food. Instead of $8.33 a day, it tops up the food spending to roughly $9.49 a day. Thanks to the Toronto Star for the information)

But a spokesperson for the Ontario Association of Non Profit Homes and Services for Seniors says long term care home residents are not getting enough nutritious meals, including vegetables, fresh fruit, meat and fish. Cathy Gapp says the lives of many vulnerable elderly people would improve if the government committed to just a few pennies more per day it its raw food allowance for long term care.

We will have more reaction to this story when Jane Brown hosts Zoomer Radio’s Fight Back with Libby Znaimer after the noon news.