Parts of the GTA – to the southwest of Toronto – remain under a Winter Storm Warning while other parts including the City of Toronto have only received a couple of centimetres of snow. 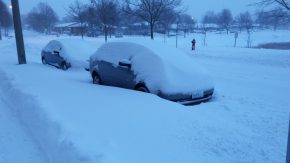 The weather system is tracking just south of the Great Lakes primarily affecting Hamilton-Niagara along with Burlington and Oakville where winter storm warnings remain in effect. Those areas have received 15-20 centimetres of snow with an additional 10 to 15 centimetres for today.

Here in Toronto, another few centimetres is expected on top of one of two centimetres already on the ground.

It’s March Break, so schools across southern Ontario are already closed. McMaster University and Mohawk College in Hamilton are closed today, as is Brock University in St. Catharines and all Sheridan College campuses.

As for travel at Toronto`s Pearson Airport, about 25 percent of flights have been affected with delays or cancellations. You’re advised to check ahead for Pearson travel on the GTAA website as well as flights in and out of Billy Bishop Airport.