Prime Minister Justin Trudeau will be heading to New York City to attend tonight’s Broadway performance of the Canadian musical Come From Away.

Trudeau has previously announced on Twitter that he planned to attend the show with his wife, Sophie Gregoire Trudeau, and that he was “looking forward to showing New Yorkers Canada at its best.” 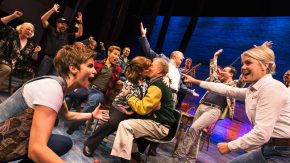 Created by husband and wife team Irene Sankoff and David Hein, Come From Away is set in Gander, Newfoundland in the aftermath of the Sept. 11th terror attacks in 2001.

Come From Away had its official Broadway opening on Sunday, which was followed by widespread critical raves from publications including The New York Times, The Washington Post and Chicago Tribune.

Come From Away recently showed to sold out crowds at Toronto’s Royal Alexandra Theatre.