A worsening drought in Somalia is threatening millions of people with starvation in the Horn of Africa nation. 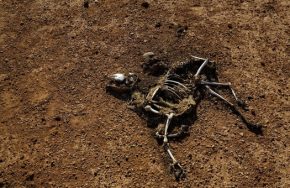 (Photo Credit: Ben Curtis, Associated Press. In this photo taken Wednesday, March 8, 2017, the carcass of a dead goat lies in the desert in a drought-stricken area near Bandar Beyla in Somalia’s semiautonomous northeastern state of Puntland. Somalia has declared the drought a national disaster, part of what the United Nations calls the largest humanitarian crisis since the world body was founded in 1945, and with animals being central to many the drought threatens their main sources of nutrition and survival.)

British Foreign Secretary Boris Johnson made a surprise visit on Wednesday to Somalia where he met with President Mohamed Abdullahi Mohamed.

Johnson told Mohamed that Britain is moving fast to try and tackle the famine. Mohamed later said that Britain would give $134-million for drought in some parts of Somalia.

Somalia recently declared the drought a national disaster amid warnings of a full blown famine. At least 360,000 Somali children are severely malnourished, meaning they will die within weeks unless they receive food aid. The country faced a similar crisis in 2011 that killed nearly 260,000 people.